The first thing I notice in the hotel lobby is the sheer number of teenagers vastly more attractive than myself. Every guy is a well-groomed letterman giant; each girl’s complexion is tanning-bed orange. They’re all dressed to the nines in prom-worthy attire, and—though I have not yet spoken to a single person here—my heart is already burning with hatred for them all.

Welcome to a monthly gala put on by Anchorage’s chapter of the Cotillion Club, a national “society” institution that (in its own words) “builds self-confidence, character, and helps set boundaries” for uncultivated adolescents across the country. Created in 1979, the National League of Junior Cotillions has spread to more than twenty-five states, striving to ingrain high school students with the basics of etiquette, manners, and general good behavior. “No other organization has trained so many young people in character and social education,” according to the NLJC.

As a young person himself desperately in need of training in character and social education, I’ve decided to visit this month’s Cotillion Club dance, which caters to the privileged elite of high school. Cotillion membership is gained only by a vote from the previous year’s members; thus, year after year, one exclusive social group (football-playing and cheerleading scum) passes membership onto the same social group of the next class. It’s a vicious circle.

But, in an effort to hear the other side of the cotillion controversy, I approach two massive jocks, both incredibly drunk.

“So why exactly do you guys come to the cotillion?” I ask.

“The girls,” says Jock #1, proceeding to emanate a sound that’s neither grunt nor laugh, but a strange combination of the two.

“How do you go about meeting the girls?” I ask. “You know, get your game on?”

“Nobody turns nobody down at cotillion,” Jock #2 elucidates, grammar notwithstanding. “The guys come to meet girls, the girls come to meet guys. Everyone has fun.”

“And once a girl says, ‘Sure, I’ll dance with you, you big ugly creep,’ what happens then?” I ask.

“Then you take them onto the dance floor,” Jock #1 explains. “And you dance with them.”

“What kind of dancing? Like, ballroom dancing, or what?”

“Yeah, you know. Freaking. Freaking! You take the girl in your arms, and then you dance with it.”

“You just described a girl as ‘it,’” I observe.

In hopes of finding some “its” with which to conduct an interview, I enter the crowded ballroom. Inside are hundreds of Aryan teenagers. I’m berated by incomprehensibly wretched rap music blaring loud enough to qualify as hell’s own personal theme song.

Ignoring this sonic bombardment, I approach a brunette girl sitting at a table and ask if she could give a few quotes for this article, but my voice must not carry over the thundering musical cacophony, as she doesn’t seem to quite understand my question.

“Of course I’ll dance with you,” she shouts.

It’s too late. The girl, who smells overwhelmingly of peppermint schnapps, grabs my arm and drags me onto the dance floor.

“If you could dance, you could have a girlfriend,” she explains, suggestively.

It’s at this point that the girl commences Freaking with me. I’m slightly taken aback by this, as I’ve never before Freaked (or been Freaked by) anyone else. You see, Freak Dancing can best be described as . . . as . . . uh, it’s just kind of . . . you know . . . well, all I’m saying is that it’s a surprise more pregnancies don’t result from it. Good God.

Anyway, after the song has ended, the brunette loses her grip, allowing me to break free. Not that I didn’t enjoy my first Freaking experience with a total stranger, but it was a tad bit weirdly public.

I walk around the dance floor, taking note of anything interesting I see, which isn’t much. Teenagers around me drunkenly fall to the ground, shrieking and giggling like small children as they try to stand. I know it’s a stereotype and generalization, but popular kids are the least substantive human beings on the entire planet. It’s the sight of simplemindedness over substance; the sight of capriciousness over consequence; the sight of our complacent, hollow generation.

In other words: you just take it and dance with it. 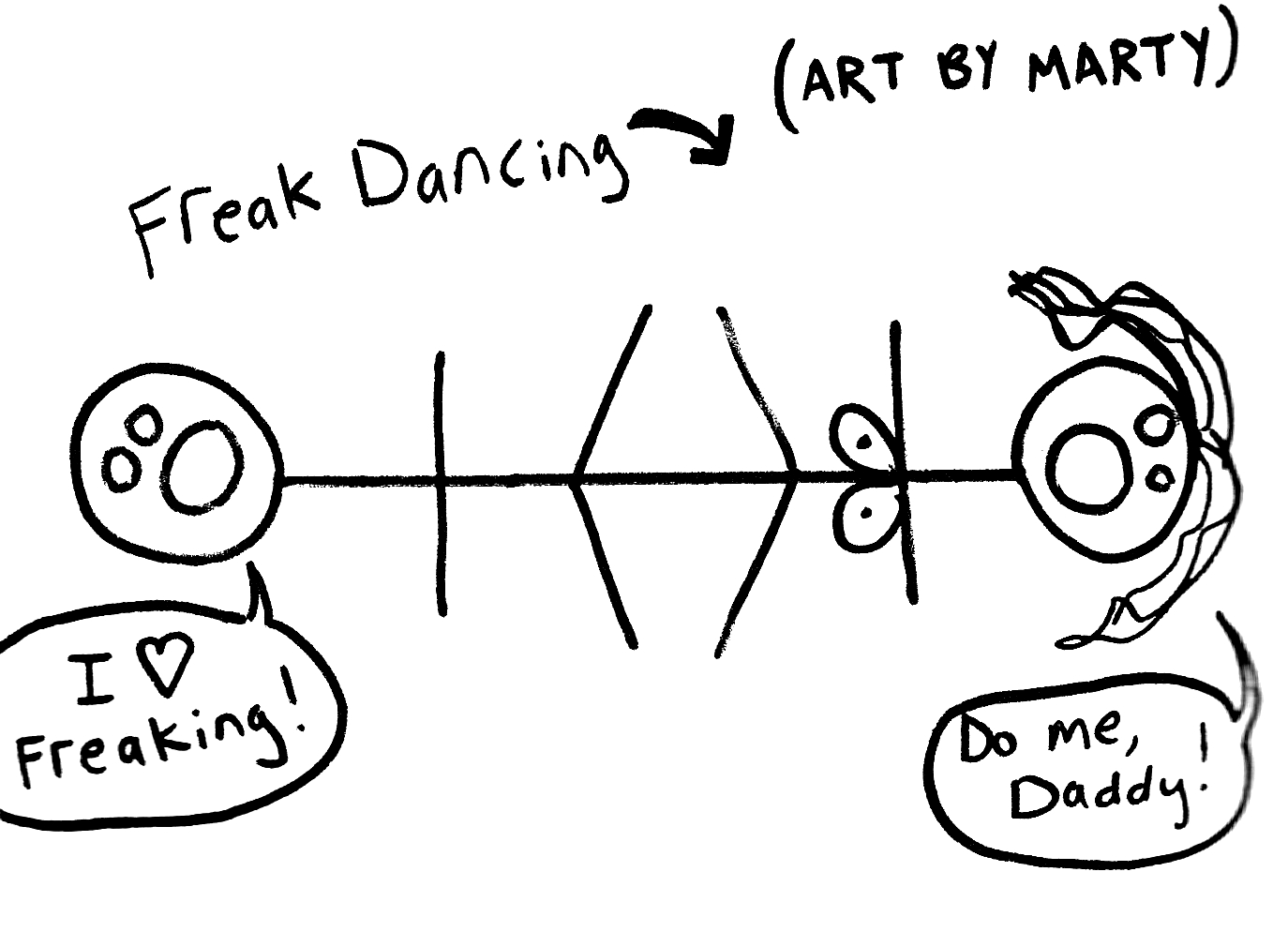