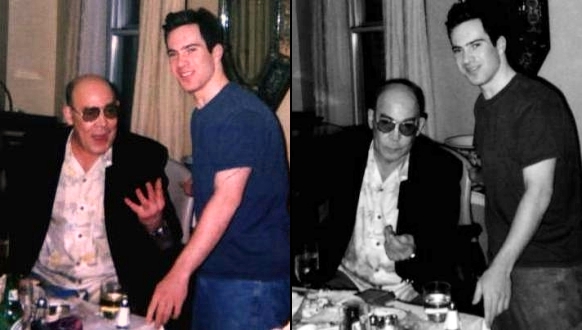 I’d asked for an interview far in advance; Thompson’s publicist had scheduled an afternoon meeting at the Carlyle, one of New York’s fanciest hotels, where he was booked under the pseudonym “Mr. Joe.” As he traveled from Colorado to NYC, I traveled from Washington, D.C., where I attended college. I had to return the next day for a midterm exam, but knew the five-hour (each way) bus ride would be worth it.

There was only one problem: Hunter’s plane was delayed, and he wouldn’t arrive until much later in the night. “Under no circumstances will Hunter give an interview until tomorrow,” the publicist said. “We need to reschedule.”

I explained that I had a midterm exam the next day; staying in New York would mean an “F.” My begging had no effect, and the publicist canceled the interview. However, I had a secret weapon: I knew Hunter’s pseudonym. At midnight I called the Carlyle and asked for “Mr. Joe.” Anita, his girlfriend and eventual wife, answered the phone and listened to my explanation. “Hunter is tired and grumpy from the trip,” she said. “I’m really sorry, but I don’t think that it’s going to hap—”

Suddenly a gruff, bourbon-marinated voice erupted in the background: “Wait! Does the boy have drugs?”

When my girlfriend and I arrived at the hotel suite, having frantically met his precondition for the interview, Hunter already had an ample supply of hashish. And yes, it was the greatest night of my life.

“What’s this going to do to me?” my girlfriend asks, looking nervously from the Good Doctor to the small black ball zipped in a tiny plastic baggie. We’re sitting in a luxury suite on the fourteenth story of the five-star Carlyle Hotel. The main room is adorned with a glossy grand piano; the surroundings as a whole must cost more to rent per night than I’ll make in my entire lifetime.

“Nothing, nothing,” says Hunter S. Thompson. He removes the hash from the plastic baggie and slices it with a bread knife courtesy of room service. “You’ll be fine, my darling.”

“Well… okay…” My girlfriend takes the pipe and sucks its potent vapors into her lungs, coughing after the first inhalation.

How did this happen? I ask myself, trying to recall the events of this insane night through the cerebral haze.

“You write in the new book that Bush is a bigger threat to democracy than Nixon was,” I say, trying to ignore the terrible drugs coursing through my cerebellum and crippling any possibility of presenting myself as a professional journalist as opposed to a drooling, stoned fan boy. “Those are big words coming from you…”

HST: Nixon looks like a liberal compared to this guy. I never thought I’d say that. It’s a horrible thought.

MB: [White House reporter] Helen Thomas called him the worst president in American history a couple weeks ago. Would you agree with that assessment?

HST: That’s what I said to Charlie Rose today. Easily the worst.

MB: You compare him to Hitler [in Kingdom of Fear].

HST: Yeah. Easy comparison. You can’t compare him to Nazi Germany? Wait a minute, of course we can. What else can we compare it to? Two years, he took America from a billion dollar surplus into a poor country. In two years everybody’s going broke and we’ve gotten into this desperate, stupid war. In two years! I mean, who are the Americans doing this? … You have to remember—and I forgot it until I watched him in the State of the Union—you watched it? He was scheduled for 41 minutes. He went 60. The last 30 were creepy. It just got weirder and weirder. He began to glisten and talk about Jesus. What was it? “The American Dream is God’s gift to humanity”? We are God’s gift to humanity. Our country is basically getting into depression, and [Bush] is still going to start the war.

MB: And people love him.

HST: Yeah… fuck, if that’s not Nazi Germany—you’ve got Hitler and the good Germans running around—then I don’t know what is.

MB: You write passionately about the 1968 Chicago Democratic convention. Was that the death of the American Dream for you? (Protests against the convention were met with unprecedented police brutality.)

HST: No, it was just the beginning of the fight. I would say right about now, boy, we’re losing. They’ve got this country turned into a police state. I’m not sure how that term would resound with you, but a police state is a heavy situation.

HST: Yeah, suspected of terrorism. It’s not so bizarre that our conversation tonight could be seen by someone in the police station as sympathy for terrorists. What’s going on here? … All you have to do is keep moving west, and you’ll still get arrested.

MB: Do you believe the end of the world is coming?

HST: Yeah, it is the end of the world. What, do you think it’s going to come on a TV show, right on schedule? Shit. They’ve been digging this for a long time. Read the fucking Book of Revelations… The end of the world is not just coming; it’s here. Until Bush came in it was still possible to be successful, happy. That was two years ago, but now the wheel is turning and I don’t think what we’re in now will possibly get any better.

MB: So are you excited to be here for the apocalypse at all? Of all the generations in human history, we might be the ones around for the end.

HST: It’s not going to happen like a thunderclap. I would like that, really. Why not? A gigantic fucking thunderclap… Yeah, the floods, the nightriders, the marauders… It’s going to be pretty grim.

MB: Do you think there’ll ever be another draft after Vietnam?

HST: Oh God… Jesus, I hope so. The draft was a disaster. The Army has become a pack of vicious, predatory, mercenary hired killers, and a draft would democratize the Army as it always has. That’s why Vietnam turned out to be a victory for our side—for the antiwar folks. You think jail’s better than going into the Army? If you don’t like it, then you don’t enlist. Enough people felt that way, and lo and behold. It was an all-bullshit war from the start.

MB: In Kingdom of Fear you claim that Fear and Loathing in Las Vegas is as good as The Great Gatsby and better than The Sun Also Rises. That’s quite the claim.

MB: It’s studied in colleges now. You’re part of the canon of American literature. Why do you think Las Vegas is the book that resonates the most with people over the years? When people think you, they think that book.

HST: Oh God… I know, I know. Why do I think it resonates over and over again with different aged people? Well, I’ll play with you on that. I don’t really know. I could say it’s fun, but it’s more than that. Why do you think it is? Why do you think it’s true?

MB: Well, the book’s a ride. On the surface it’s this cartoonish, ether-chugging adventure, but then there are all these darker themes—the death of the American Dream, instant gratification, how Americans find happiness—all that’s underneath. So it’s like a thrill ride to read the book, but then you pick up other messages along the way.

HST: (Laughs) Yeah, well, that’s good enough for me. Weird. It’s like Huckleberry Finn or something like that, you know? Travel journalism. I just wrote it down in my fucking notebook. … There’s still that controversy whether Mark Twain wrote fiction or not.

MB: Do you ever feel pressure from your fans to live up to the cartoonish image you projected in the old days?

HST: What do you mean I projected? You mean [Doonesbury creator Garry] Trudeau. Try to make a living as a writer and you’re turned into the lead character in a fucking popular cartoon… Shit, I don’t even know Trudeau. I was never looking for publicity and said, “Hey Garry, why don’t you put me in that strip of yours? That’s a pretty good idea.”

MB: Let’s talk about The Rum Diary for a minute. Was it weird to put something out 40 years after you started it?

MB: Was the novel complete before it was published, or did you do touch-up work on it?

HST: Cut out everything. There were scenes in there that the American public isn’t ready to handle, to put it lightly.

MB: How does it feel to have multiple biographies written about you? Flattering? Terrifying?

HST: Well, there are three or four out there, right? Of course, it’s like reading reviews. With Jean Carroll’s book [Hunter], what happened was every old friend of mine had been contacted—friends I’d forgotten about—and I got calls from all my friends telling me this lady had come by trying to get quotes for her book. My ex-wife called me a wife-beater and a thief, that crazy bitch. Yeah… That’s a long story, but people I hadn’t heard from in 30 years called me to ask if it was okay to talk to this lady, and some didn’t even call me. I didn’t want to say, “No, you can’t,” but God… that creepy bitch.

MB: You’re becoming an elder statesman of the counterculture.

MB: Okay, stupid question. So do any of the modern drugs interest you at all, or have you slowed down on that?

MB: Have you ever overdosed on anything?

HST: (Laughs) Vitamin A. I did beta-carotene and—I’m trying to think of the others—I did a super-overload of like thirty-five or -six vitamin tabs. I’d been up for two days working on this story, on deadline and I’d almost finished it, and I was definitely tired and worn-out. So instead of drugs I did vitamins. I thought, well, fuck—I’m too tired to do speed; it would be too dangerous. Why not go healthy, you know? So I starting eating these vitamins—C, D, E—and I figured if vitamins are good for you in an emergency, why not just double-up, quintuple-up? And I ate vitamins by the handful for like two minutes without stopping, thinking these would pump me up. And if vitamins are good, the more the better… Holy shit. I was turning beet-red, sweating, paralyzed—it’s a little bit like hashish, actually.

MB: In the new book you admit you secretly pray to God.

HST: No, this is far beyond God.

HST: There is no God.

MB: A lot of the figures from the ’60s have passed on in the last 10 years—Ginsberg, Leary, Kesey—how does it feel to see that era fading away?

HST: You morbid little bastard… yeah, how does it feel to be the last buffalo? Fuck, I don’t know. I don’t think anybody knows… When you talk about the ’60s, you’re talking about people who were scared out of their senses, trying to get the feeling for what the fuck was going on.

(Thompson suddenly screams for his assistant to turn the television volume up to eardrum-shattering levels. The History Channel is airing former U.S. ambassador Adlai Stevenson’s Oct. 25, 1962 address to the United Nations General Assembly, demanding that the U.S.S.R. immediately withdraw its nuclear warheads from Cuba. The address on behalf of JFK is widely credited as having prevented the Cold War from going nuclear.)

“This one always gets to me,” Thompson says wistfully, captivated for the entire duration of the speech. “You know, it haunts me that I never pursued the ‘who killed Kennedy’ story. I believe it’s the one story I consider a failure. Yeah, I failed, and now the assumption is that obedience is normal—the president is king.”