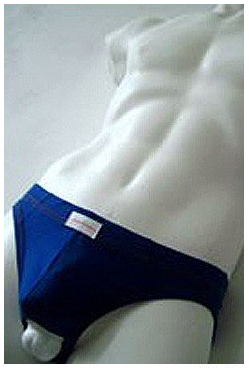 Every man has skeletons in his closet. And for half a decade, I’ve had crotchless boxers in mine. In 2005, the German company sacfree® (lower-case “s” for some reason) sent me a trial pair of its innovative undergarment, which covers your banana while exposing your kiwis.

“The world-wide first testicle-free men’s underwear — a fantastic, comfortable, free feeling and a new sexy look. … And so it works: sacfree® protects and supports the penis in a bag-like pouch. Till here sacfree® feels like a classic slip. For the testicle sacfree® offers pure space. Through an opening the sac can hangs out completely free. … With its open kind sacfree® makes for a fresh breeze. A comfortable and manly healthy characteristic… [A]bove all, people who works vocationally much in sitting will appreciate the new sacfree® freedom.”

I’m a writer, so I certainly works vocationally much in sitting. But I never got around to sampling this fashion wonder, despite my curiosity. I suppose my testicles preferred the warmth of security to the cold unpredictability of freedom.

But as Ben Franklin often said during the George W. Bush years, “They who would give up an essential liberty for temporary security deserve neither liberty nor security.” So I finally manned up, dropped trou, and gave sacfree® a test drive for 24 hours, doing whatever I normally would, except with super dangling balls.

The first thing you’ll notice when you don sacfree®is that your sack is free. That’s the whole point, obviously, but it’s weird. Your manhood is tucked away, but your boys drop through a hole at the bottom and just… like… flop around. You’re simultaneously naked and clad. (If you walked around town in these, would it qualify as indecent exposure? A question for Socrates, or the nearest law enforcement officer.)

So you take a stroll around the neighborhood, harboring your dirty little secret. When strangers pass on the street, you feel like a creep. (Especially if you accidentally bump into them.)

Unfortunately my sacfree® pair was a bit tight and began to chafe after 30 minutes, so they’re seemingly better for sedentary purposes.

Undaunted by the irritation, however, I spent another 30 minutes on the elliptical. I expected the bouncing up and down to feel terrible — as if gravity would slam my sperm factory like I slam Tecate after a cheap tequila shot — but much to my surprise I hardly noticed. It didn’t improve my cardio routine, but it didn’t hurt either.

Another surprise: my balls were completely sweat-free afterward. My brine-like groin juice isn’t particularly malodorous (think “daffodils”), but sacfree® could be a lifesaver for guys who suffer from chronic ball overheating.

My fiancée and I planned a date at an upscale Italian eatery, so I showed up wearing sacfree® under my slacks, unbeknownst to her. (In retrospect, I should’ve proposed to her in sacfree®.)

The clash between my ostensible sophistication and private depravity was somewhat hilarious — I felt like a gentleman and a lecher — but it’s unsatisfying to keep a joke to oneself.

Attempting To Seduce My Lady

The sacfree® press release promised: “With sacfree® there is something more to see for her … A new attraction for touching.” So back in our bedroom after dinner, I removed my shirt. Oooooooh, she cooed. I unfastened my belt. Mmmmmmm, she purred. I dropped my drawers.

“Your… your balls…?” She gawked at my crotchless boxers with a combination of bafflement and horror.

“Yes,” I nodded confidently. “My balls.”

She reached for the TV remote instead of my (semi-concealed, semi-showcased) male anatomy. “Put your pants back on,” she instructed. “Those look ridiculous.”

“You don’t have a new attraction for touching?” I asked, heartbroken.

With my (blue) balls hanging through my useless German underwear, exhausted from a long day of journalistic experimentation, I lay in bed — rejected and dejected — and finally discovered a purpose for these peculiar undies. Your little guy enjoys the comforting snugness of typical sleepwear, but your boys lightly brush against the sheets. The sensation is delightful and idyllic. If nothing else, sacfree® makes for heavenly pajamas.

Tragically, it seems that sacfree® is no longer for sale. At some point between 2005 and 2010, its website was reduced to a logo and nothing else, and company representatives did not respond to an email about its continued existence. Only 500 pairs of sacfree® were initially produced, and it doesn’t appear that more are in the pipeline. You can’t even find the goddamn things on eBay… not like you’d want them used anyway.

This is yet another reminder of why we must never put off until tomorrow that which we can accomplish today. If I had written this sacfree® review five years ago, perhaps it would’ve inspired a generation of men to let it all hang out. Now, however, the possibility of such a worldwide testicular revolution is left blowing in the wind.