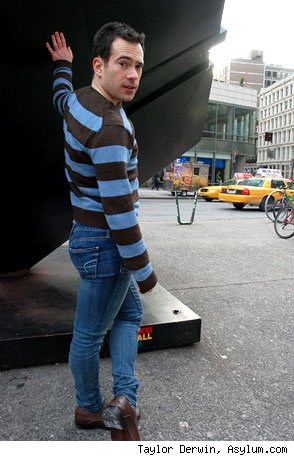 Conan O’Brien in acid-wash jeggings was a disturbing sight, but fashion-forward men from the catwalks of Milan to the boutiques of SoHo have embraced these body-hugging abominations.

Long-limbed Conan did it as a joke, but my editor wanted to see if a normal guy could actually pull it off. Anticipating the day when every red-blooded American male has a walk-in closet overflowing with jeggings, I decided to sample these uncannily form-fitting bottoms, which I never could’ve foreseen as a teenager in the 1990s when my generation’s “sagging” horrified old people for some reason.

And let me tell you from experience: our wide-legged ’90s past is way less horrifying than our inevitable Lycra® future.

The first challenge was to actually find a pair. I assumed that decadent Italian brands such as Prada and Versace were guaranteed purveyors, but Prada’s spokeswoman informed me that “Prada does not produce or carry male jeggings,” and Versace’s refused to dignify my call with an answer. So I visited the (relatively) downmarket store Forever 21 instead, and asked the clerk where specifically I could find jeggings.

Fair enough. I would have to cross a sacred barrier.

“You’re the first man to ask about them…” She looked at me as if I were some kind of demented freak, which is pretty understandable, I guess. “Actually we’re out of stock. They’re so popular, it’s crazy… popular with women, I mean.”

I began to wonder if I’d ever find jeggings. Perhaps it wasn’t meant to be; perhaps I wasn’t supposed to wear tights. (Deuteronomy 22:5: “[N]either shall a man put on a woman’s garment: for all that do so are abomination unto the LORD thy God.”)

Luckily I went to American Eagle instead of heeding the Bible. The friendly staff led me to their veritable mountain of in-stock jeggings, and approved of my quest. “All the guys here wear jeggings,” chirped a helpful American Eagle saleslady. “My gay friends wear them with their Uggs. You look like a Size Six. Want to try some on?”

“Absolutely,” I said. “Should I use the men’s section fitting rooms or the women’s?” (I honestly wasn’t sure.)

Before I entered the fitting room, the saleslady warned me: rocking this look requires extreme comfort and confidence with one’s body. It was possible I’d learn some things about myself that I’d never be able to unlearn. This sounded as daunting as a NASA rocket launch, except that astronauts don’t have to withstand as many Gs of pressure.

Alone with my shame inside the dressing room, I removed my ho-hum, loose-fitting jeans and (quite literally) forced myself into a pair of $49.50 jeggings. I had to yank the cuffs down to my ankles and yank the waistband up to my pelvis, which caused plenty of awkward stumbling and hobbling around the confined space.

Once the pants were in place, however, the material conformed to my body like a technological wonder substance from an advanced civilization. I hate to admit it, but they were kinda comfy.

Of course, I was concerned about the Bulge. If you search the Net for “meggings,” pretty much every result discusses the Bulge. If you wear these things in public, you might want a lawyer to explain the local indecent exposure laws.

But I followed HowCast’s advice for men’s jeggings aficionados: “Wear boxer briefs to contain your bulge… If necessary, use double-sided tape to hold your package in place.” (Or a stapler. Ha! Ha!) Subsequently it wasn’t grotesquely prominent, which is perhaps a sad admission.

Far more exposed than my family jewels: the high-definition curvatures of my thighs and backside. As Tim Gunn himself said on Conan, “You know whether a guy’s leg is more like a chicken leg or a ham hock by virtue of that leotard…” There’s no hiding a single particle of cellulite. (Good thing I’d exercised obsessively in the week prior. And by “obsessively,” I mean “twice.”)

“They look great,” the saleslady said when I exited the fitting room. “It really works on you!”

A male colleague of hers concurred that jeggings are ideal for the modern man. “I love wearing them around the house,” he said. “They do wonders for the tush.”

Satisfied by their flattery, I paid for the merchandise and took my wondrous tush outside. The first thing I noticed: jeggings provide no insulation. The freezing temperature and ferocious wind pierced the paper-thin fabric, whereas my traditional jeans always keep me warm. I felt as if I were naked in a meat freezer, except without any delicious meat.

Despite the frigid onslaught, I summoned the fortitude to interview complete strangers about my anatomy.

“What do you think?” I asked two college-aged women on the street. “Is this an attractive look for a guy?”

“No way,” said one of them as I spun in a sexy circle. “It’s just showing too much.”

Her friend agreed: “Way too much.”

But most of the bystanders had a different reaction: ambivalence. They gave me a half-dozen jaded variations of “how are these different than skinny jeans?” Whereas I expected to shock people with my new androgynous wardrobe, I merely looked like a random twenty-something New York City hipster.

If I wanted a focus group of real Americans — the kind possibly shocked by pants without pleats — I’d have to journey into the dark heart of Times Square. Upon arrival I asked a middle-aged woman from Pennsylvania for her salt-of-the-earth opinion.

Another female tourist was equally critical: “I don’t think so … I’m not a fan.”

But her husband, a spectacularly rotund gentleman, examined my jeggings-defined physique and offered this delightful verdict: “If I were skinny, I’d wear those too!”

How to Decide If You Should Wear Men’s Jeggings

Are you in peak condition? Take a good, hard look in the mirror. If you’ve packed on the holiday pounds — nothing washes down pumpkin pie quite like a glass of egg nog, right? — wait until you’ve fulfilled your hit-the-gym New Year’s resolution. Or else you’ll make an ass out of yourself in more ways than one.

Can you part with your phone? Jegging pockets are too shallow for a mobile device. And a thief could easily grab your wallet. So you’ll need to… uh… accessorize. As reporter Joshua David Stein explains, “The perfect accompaniment and necessary corollary to the majegging is the murse.”

Exhibitionist or introvert? You won’t get many gawks and stares in an eccentric fashion capital like New York, but elsewhere you’ll make a big statement. The mesmerized reactions could lead to major discomfort, if you care what others think.

Check the forecast? As mentioned earlier, jeggings won’t shield you from the brutal cold. Beauty is painful, of course, but — under the circumstances — shrinkage is even worse.